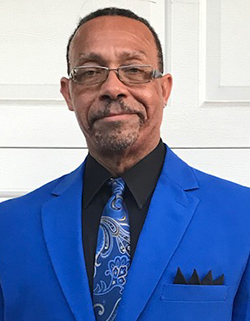 Ted Durden was born and raised in North Carolina and moved to Southern California in 1978. He is the youngest of six siblings and father to five. He has been working in the realm of workers’ compensation for the last 27 years, having represented injured workers, employers/insurance carriers, and most recently medical providers.  Ted is a registered Democrat with a decidedly conservative tilt. While he considers himself party faithful, he is not policy loyal, often disagreeing with his more liberal peers on how much influence the federal government should have on our daily lives. He does not believe it is the responsibility of the federal government to solve all of our ills.

Ted also believes that regardless of the political affiliation of the person who sits in the seat of power of the White House, one should pray for his or her success, because at the end of the day, She/he is OUR president. He is also a firm believer in personal responsibility and believes a man or woman’s future is crafted by his or her hands and should be the result of hard work, not handouts. Ted believes in civil and respectful discourse with political opponents, especially in areas of disagreement. He does not believe in the politics of fear, divisiveness, or class. With Steve’s support, Ted started the Voice of Reason, a podcast aimed at bringing subject matters to an ever-widening listening audience that are interesting, thought provoking, provocative, and political. Since the inception of the Voice of Reason, Ted has now been joined by Mark Reed, a politically savvy Republican candidate who has brought his own view of politics to the table.